The End of the Trail for Horse and Buggy—J.P. Rael

Bad roads were an obstacle to the industry. Every time a Model T went over this road on its way to Taos it made an awful racket. 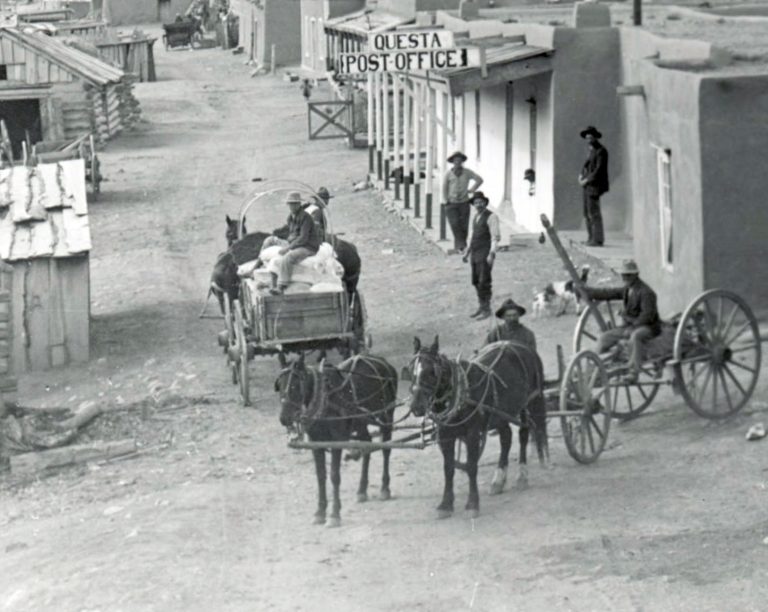 In the days of the horse and buggy, in the latter days of the Territory and at the beginning of Statehood, this section of the country was in dire need of road improvements.

Going back to the beginning, the first settlers came into our beautiful valley over trails heretofore traveled and marked by the red man. These trails were gradually improved. That was the beginning of our primitive roads. Sites and locations were changed from time to time according to our needs and natural conveniences required to travel by wagon, buggy or stagecoach.

Many times in my early days I used to listen to the old timers talking about ‘El Camino Real.’ They used to say that the first road of New Mexico was the road leading north of Santa Fe into Taos then north through Questa to the Colorado line (originally known as the Kiowa road).

In coming from Taos through Arroyo Seco, Arroyo Hondo, San Cristobal to Questa, the road was narrow, rough and winding, but even so it was considered fairly good as far as Arroyo Hondo. From there on, due to the rugged and mountainous terrain, it snaked through the woods up and down deep canyons, gulches, ravines and arroyos making it tedious and long to travel.

In crossing arroyos, creeks and rivers there were few bridges if any at all. These were narrow, primitive and of short remain on account of the frequent and big floods.

It was with much sacrifice that freights could be hauled on either direction. Such hills as ‘La Cuesta del Embargo,’ ‘La Lama,’ ‘La Garrapata,’ and ‘San Cristobal’ were much feared in bad weather by the freighter, the traveling salesman and the public in general. It was not an uncommon incident, after a rainy or stormy day, to find at La Garrapata Hill people in distress—mean yelling, whips cracking, brakes squeaking, horses puffing, sweating, and panting trying to pull the loads up the hill. At ‘La Cuesta Del Embargo’ just south of Questa, when it was icy and slippery in the winter time, many were the travelers that took a rushy slide—horses, carriages and people down the long dangerous arroyo through brush, projecting rocks and stumps to the bottom of the hill to lament and count the pieces. One predicament after another of this nature prompted the old settlers to change the original name of ‘San Antonio Del Rio Colorado” to Cuesta. Today the village is named Questa on account of misspelling the word when an application was submitted to the Post Office Department for a post office.

About this little river of ours, we can say that it has been a little violent and uncontrol- lable at times. Before the present old bridge was built, which was about the year 1913, no bridges were built that would remain for long. Every flood that we had washed our bridges away. In 1912 the residents tired of such occurrences decided to build a bridge that would challenge the floods and stand but to our disappointment the flood of that year washed it away. Not even a sign of it was left. The logs were strung along from the fish hatchery to the junction of the Rio Grande. When the bridges were washed away, the people had to ford

the little river. We had old timers who guided the people across but not all the time were they so sure of the ford site. When they missed the ford and swift current carried carriages and people down the stream you could hear women and children screaming and yelling for help. None were drowned that I know but there were many narrow escapes and many prayers offered to the patron saint.

At about this time the automobile industry was making progress by leaps and bounds. The Model T was coming as well as other makes of cars. Bad roads were an obstacle to the industry. Every time a Model T went over this road on its way to Taos it made an awful racket. It boiled, smoked and balked but regardless of all its racket it was bound to stop and rest at La Garrapata Hill. There you heard curses and clamores but the good native and the good old horses were there to help and pull the Model T up the hill. So it arrived into Taos but never to remain quiet. Its clamors reached Henry Ford and also the State Highway Department. The result—better cars and better roads.

The road development started in about 1914. The road up the hill was built as far as La Lama. As there was no modern machinery in those days, such a road was built with much sacrifice and hard labor. When it was finished it was considered a great achievement but not enough. In 1930 requests of the people for better roads was heeded and a better road was built as far as La Lama at a lower location. Machinery was used for this construction and this was greeted as a fairly good road but not to the standards of a Federal Highway.

This year after a prolonged period of waiting, asking, petitioning and requesting the Federal Government has come to our aid and the State Highway Department under the admin- istration of our good Executive, Governor Mechum, will finish a road into Questa that will be called a Federal Highway to meet the specifications and standards of the Bureau of Public Roads.

This is a step forward to the progress of the State, to Taos County, to the unparalleled tourist centers of Red River, Questa, Cabresto Lake region, the Latir Lakes, the rich molybdenum deposits in this district and the possibilities of the southern San Luis Valley. This may be the unlocking of the door to a new era for the section of the country.

With prejudice towards none and with a friendly heart, we should all participate in extending a thankful hand for this accomplishment.