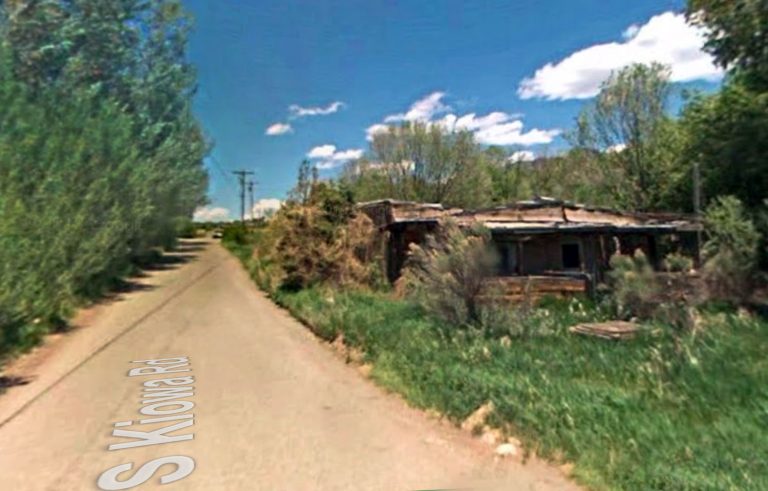 There on the outskirts of the village of Questa, by the side of Cabresto Creek just south of Highway 38, under a cluster of old cottonwood trees stood the old Oratorio, now unkept and abandoned but still a monument of history and Spanish culture. Don Juan Benito Valdez and his wife Doña Estefana built this adobe structure as best as can be estimated around 1840 as a place of prayer and religious congregation. It was built in the style of our Catholic churches, for themselves and their slaves and piones (laborers) of which they had quite a number.

This Oratorio was not as large as an ordinary Catholic church of those days, but it was constructed of the same type of material, style, and order, with massive walls and huge vigas. El campanario (bell tower) was located outside on top of the roof and the altar contained all the santos de vulto (statues of religious figures) you can think of. It was equipped with los candelars de palo (wood candle holders) and nichos (niches) in the walls for one of the most precious collections of santos and imagenes.

An Oratorio and a morada are both houses of prayer. The difference is that an Oratorio serves the community of both men and women while a morada is the private property of La Sociedad de Nuestro Padre de Jesus (Los Hermanos), whose membership consists of men only.

It is known that during the Civil War, Don Juan Benito, a highly respected citizen, still lived in Questa and that he was authorized by the government to send the quota of draftees required of this community for the army. Some time after that, Dona Estefana died and Don Juan Benito Valdez moved to Walsenburg, Colorado, with his son Don Leonides Valdez. Thereafter, the old Oratorio was abandoned, left to decay and collapse. Had it been kept up and preserved, it would not only be a historical landmark, but a credit and proof of initiative and determination of those that settled and conquered these remote regions so that we might at a later date claim it as our own.

It is known that Don Juan Benito was the descendent of the Valdez family that settled at Des Montes, on the top of the hill just south of Valdez, after people began to settle beyond the Don Fernando settlement. His brother, Don Victor Valdez, remained at Des Montes and made his permament home there and later at Valdez.

The santos disappeared by theft or destruction. Unfortunately, santos have become a collector’s item. When Jesus entered the Jewish temple precincts, he drove out all those engaged in buying and selling and overturned their money tables. The Oratorios and moradas had no such help from Jesus, so all the santos have disappeared mostly through theft.

En los Dias Santos (holy days, mostly Holy Week) there are no more visitas to las Moradas. On those visitas, people used to take their velas and offer them to los Hermanos to be lit as a form of prayer petition for the people, for los Hermanos, or as a prayer of petition to San Antonio, Santa Isabel, or their favorite saint. Today, instead of lighting a vela (candle), perhaps some drink a toast or anything to be in the bandwagon of modern times, style, and vanity. It is important that the facts and truth on this subject be preserved.

As for Don Juan Benito and Dona Estefana Valdez, it is a conceded fact that they were religious people and very considerate of the poor. I heard the oldtimers say that after they lived in Questa for a good number of years, the Valdez’ wealth in land and stock had increased considerably. Before Dona Estefana died, she made a donation to the poor and needy. She had her piones, the sheep herders, distribute one sheep to each family who lived along the Rio Grande Valley. This example shows that the Valdez’ were people of faith, charity, and good will toward their neighbors.