Vecinos on the Northern Frontier 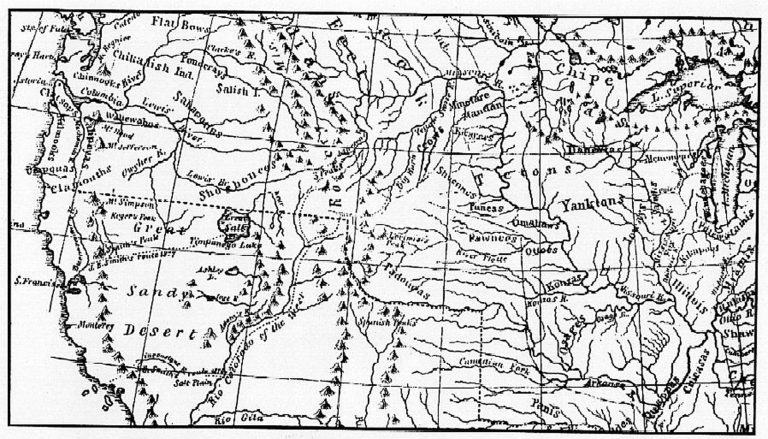 Don Francisco Laforet (his last name has many spellings, including La Forett, Laforee, Laforey, and Laport) is said to have come to live in the Rio Colorado area in 1829. He built his house near the river, but Indian attacks soon forced him to move up to the ridge with other early settlers (67). His arrival on the banks of the Rio Colorado was a harbinger of things to come. Laforet was born in Montreal, Canada, somewhere between 1791 and 1796.

He came to New Mexico with Syvestre S. Pratte and the Robidoux brothers in 1825 and two years later married Maria Dolores Armenta in Taos. In 1827 he traveled from Taos “outside the boundaries of the Mexican Federation” with Ceran St. Vrain and Charles Beaubien, among others, and later that year he made a trip into the mountains with “Old Bill” Williams and others. Laforet became a Mexican citizen in 1832 and continued to trap in the area (68).

When he actually settled in Rio Colorado seems to be up for debate, although the Donaciano Vigil account (see above) seems to support 1829. His father-in- law Antonio Elias Armenta was one of the original petitioners for land in Rio Colorado in 1836 and in 1842 (see below). Laforet amassed some 200 varas of land for farming adjacent to his father-in-law’s holdings. We’ll get a better picture of Laforet from George Frederick Ruxton, who visited him in 1847 in Rio Colorado (see page 50).

Another early settler in Rio Colorado seems to be Don Juan Benito Valdez, who is described as one of the five pioneers to settle this area in Frank V. Garcia’s account given to WPA Writer Lester Gaines in “Early Life in Questa” (69). Born in Taos around 1813, Don Benito built the first chapel in Rio Colorado (see J.P. Rael’s description “El Oratoria de Dona Estafana” in The Cycle of Birth, Life, and Death section). He is said to have had a large number of Indian slaves as part of his household.

During this period, Indian slaves were found in the homes of the wealthier families; these Indians did household work and in many cases were allowed to marry and raise their own families. They usually took the Spanish family name. Records show that Indian slaves could be purchased in Texas for $100 each (70). We’ve already referred to trips in pursuit of runaway slaves by Juan Archuleta in 1650 and Juan de Uribarri in 1706–1709.

The legal background supporting this slavery dates from a 1452 papal bull that originally provided for selling Moslems into slavery, and later was expanded to include “foes of Christ” and all unconverted people. In the New World, the encomienda system gave an allotment of Indians to the landed gentry to serve as slaves. By the 1850s, there was slave trade all along the Rio Grande (71). It is believed that the early French trappers also partook in the trade.

Antoine Robidoux is said to have collected Indian women and children to take to New Mexico. The Utes also participated in this trade; in fact Walkara, the Ute leader, was said to be “lord of the Mexican-Indian slave traffic from 1832-1835.”

Mountain Man Dick Wooten in the 1840s described a common scene—“…it was no uncommon thing to see a party of Mexicans…on the western slope of the Colorado Rockies buying Indian slaves….” The slavery worked both ways—New Mexicans traded young Mexican children to the Indians for horses—boys were worth $100, girls were worth $150-200. Trade fairs in Taos from 1841-1846 also dealt in the slave trade.

The Superintendent of Indian Affairs had six Indian slaves, and the Territorial Governor Henry Connely had slaves in his household (72). The Emancipation Proclamation of 1863 had no effect on this slavery in New Mexico, and it was not until President Andrew Jackson’s proclamation of 1865 that government employees had to discontinue their “practice of Indian slavery.”

Another visitor from the east, Jacob Francis Dye, passed through the Rio Colorado area in 1831. This area was still rich in wildlife, as Dye describes (73):

“By this time we arrived on the Rio del Norte, in a small strip of country where deer were very plenty. A difference of opinion existed here, thirteen men out of thirty-four wanted to stop and kill meat, sufficient to take us on to Taos, but our commander, Col. Bean, gave the order to proceed on without delay and they started immediately. Our little party of thirteen remained behind, that day, and killed twenty-three deer and packed them into camp, before twelve o’clock. We barbecued the meat that night and was on the march early next morning, overtaking the main party the same day, who was on a short allowance of meat…we packed up and proceeded on the Rio del Norte till we came to a large flock of sheep which was herded by New Mexican shepherds. As soon as they discovered us they fled, and one of them proceeded to Taos, about 45 miles, and gave the alarm; the other after some considerable time came back to the herd. The New Mexicans treated us with hospitality and friendship, and three days time we were in Pueblo Rio Hondo, where we found all the luxuries that those people, in their profound ignorance, at that early day, were provided with, or the country afforded.”

Dye also describes buffalo in the area “…we took up the line of march and that finished the last of our beef—hump, rump, and stump. We proceeded on our way two days, without any rations, when our friend Nidever discovered a band of buffalo and filled five fat cows” (74).

Dye apparently was traveling with the Robert Bean—Alexander Sinclair party of trappers on their 1830–1831 expedition. They had received information about the trapping possibilities in the Rocky Mountains from the Major Stephen H. Long and Captain John C. Bell expedition of 1820 and traveled from Fort Smith Arkansas to Taos, hunting for beaver, mostly unsuccessfully, along the way. They spent the winter of 1830-1831 in Taos and Jacob Dye was hired by Simeon Turley.

New Mexico became a department in 1836, which meant that it had to take control of its problems and not depend on Chihuahua. Starting in 1837, Governor Manuel Armijo began taxing merchants and traders to raise money to fight the Indians. He also demanded that citizens stay on the frontier—for him the land grant policy was an opportunity to occupy the frontier to hold off foreign incursions and a means to continue trade with the Indians. It was in this climate that formal settlement in Rio Colorado was attempted again. People were already living in the area, as indicated by the listing of Rio Colorado as a settlement in the First District, Partido 2 in the 1840 census (75).

72. Office of Indian Affairs. The Official Correspondence of James S. Calhoun while Indian agent at Santa Fe and superintendent of Indian affairs in New Mexico, collected from the files of the Indian Office and edited under its direction, by Annie Heloise Abel. Government Printing Office, Washington DC, 1915.