The boy that grew up in Questa, who was an integral part of the community, merchant, farmer and a prosperous business man. - by J.P. Rael 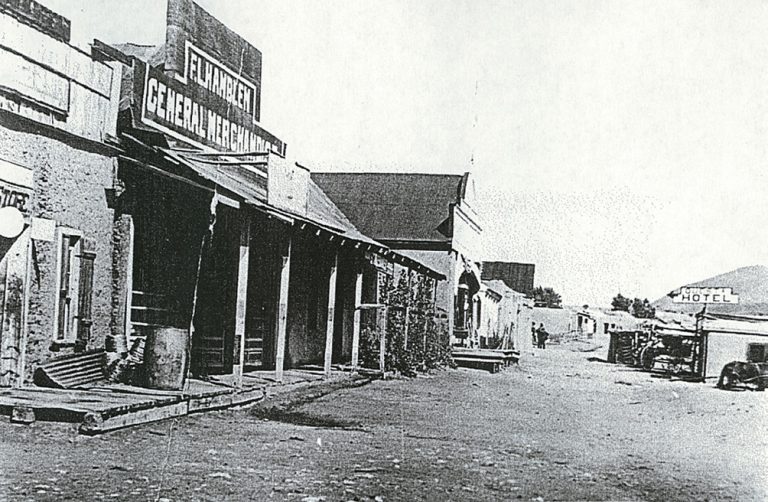 When his parents came to Questa, we don’t have the exact date, but it must have been during the early 1870s. As far as it can be ascertained, his father came from Georgia during the Mormon movement to the west. Floyd came to Questa as a child. He had two brothers, Oscar and Asplund, and two or three sisters. All grew up in Questa. One of his sisters taught school in Red River.

His father Lee Hamblen was the first postmaster here in Questa and he must have been responsible for the mispelling of the Cuesta, as it should have been. Lee Hamblen started a small grocery store in those early days which he built into a prosperous business. Floyd grew up in the business and came to be a shrewd business man.

He married a local girl by the name of Lucy Payne. Lucy’s parents came to live in this community in those early times. They had no family of their own. She was behind the counter day in and day out. In 1910 Floyd sold his store to Jacob Posner and for a time he dedicated himself to his sawmill business and farming operations. In 1912, Floyd, Salomon Rael, and Leonides Trujillo formed an organization of the local people which they called “The Llano Irrigation Corporation.” They went to Santa Fe and contracted with the State for a large portion of land which was later divided into smaller tracts and divided to the members of the Corpo- ration. Floyd owned the larger part of this portion of land.

In 1924 he went back to the mercantile business in partnership with Jose Albino Rael. After a while he sold his share of the business to Jose Albino Rael, but the urge of the grocery business was too strong in him to resist.

In 1927 he ventured again into the grocery business; this time in partnership with Daniel Gonzales. This store was located between Questa and Cerro right at the intersection of the Rio Grande Park and State Highway #3 [now Route 522]. This partnership was dissolved after a while but Floyd continued operating the business as the sole owner. His business grew up fast. In time he had a big store. In 1929, right at the peak of the boom before the Depression, tragedy ended his life.

It was a dreary and stormy day, two or three days before Christmas when the bad news broke out—first as a rumor but soon as a reality—Floyd had been killed in his own store. The accomplices must have come into his store right at the time when there wasn’t anybody but him in the store. He was killed with one of his own axes.

John Korey, a trucker and freight deliverer, saw from a distance two men rushing out of the store and jumping into a car that was parked in front of the store, then driving at a high speed to the North. When Korey arrived at the store, everything was a mysterious silence and nobody in sight. He looked around and began to call for Floyd. Nobody answered. Then he moved closer to the stove there he saw Floyd crumpled on the floor in a pool of blood. Korey got out of there in a trance of terror. There was no telephone anywhere near so he came down to Questa as fast as he could and called the law. The sheriff came over as soon as he could but it was too late for the chase. Besides the sheriff there were a gathering of people offering to help.

The criminals had it well planned out. As it was found out later, the criminals went about three miles north then took a side road to the left, circled around Cerro, then went south into the road that now leads to the Rio Grande Park.

They continued in that direction until they came to a point opposite Chiflo Mountain. There they took a road leading to the timber where they parked their car, built a fire, broke the money box, and disposed of what incriminated them, throwing to the wind papers and checks that were found later by other people. That done, they started to eat a delicious meal of canned food and other varieties that they must have taken from the store.

Oscar, Floyd’s brother, hired a detective to clear out the case. They worked in the case for quite a while but nothing strong enough was uncovered to bring a conviction against any body. They had leads and suspicions which almost clear out the matter.

The sad memory of the fate of Floyd Hamblen remained in the minds of his friends for a long time. They felt that an honest and reliable friend had been lost. At any time that any outsider criticized or despised any of the people of Questa, he would sure to have a fight in his hands.