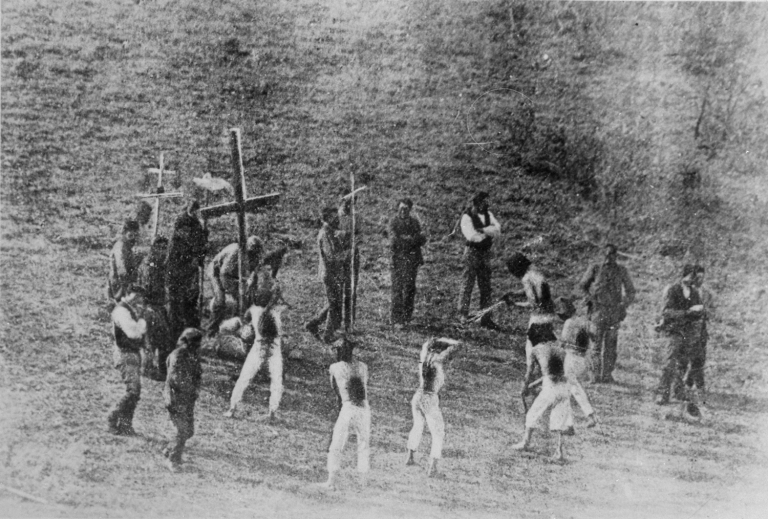 Every year during Lent and Holy Week, newspapers and magazines all over the country contain an article of one kind or another about Los Hermanos (Brotherhood of Penitentes), moradas (Los Hermanos’ house of worship), or el Calvario (the Cross and crucifixion). Some of these writers are fairly well informed, courteous, and friendly. Others are less careful even to the extent of insulting, affronting, or humiliating these good people.

I was born and raised in northern New Mexico and even though I never had the honor of belonging to such a noble organization, La Sociedad de Nuestro Padre Jesus, I believe that I am in a position to know that Los Hermanos were good people. Perhaps they were some of the best in New Mexico. They were contrite, honest, God fearing, and willing to sacrifice in prayer and in doing good to their fellow men. In fact, they spend a good part of Lent, especially during Holy Week in prayer, fasting, and imitating, as close as possible, the sufferings of Christ’s passion.

They had their rules and regulations to live by. They went out in proseciones (processions) and took out their santos and displayed their estandartes (religious banners) as they sang their alabados (lament of the sufferings of Christ) and prayed, el rosario (the rosary), las estaciones (stations of the Cross), or went on el encuentro (where Jesus meets his mother and holy women on his way to the Cross) or el prendimiento (where Jesus is arrested and taken to trial), but it was all harmless and of no bother to the community. In the eyes of many people, this seemed ridiculous, unfounded, and primitive. But to Los Hermanos the practice of humility and unselfishness was considered a virtue and a privilege. It was a privilege to worship and serve God by doing penance in their own way.

I believe there are no more Hermanos, moradas, or calvarios today [in Questa]. You do not see these procesciones anymore. Their tinieblas (darkness after the death of Jesus), pitos (whistles), and matracas (rattlers used in remembrance of the darkness, earthquake, and disturbance after the death of Jesus) can no longer be heard. There are no more prendimientos or incuentros on Holy Thursday or Good Friday. Las moradas are unkempt, fallen down, or destroyed.

Where are the santos? Perhaps few can explain. We know that the collection of santos has become a profitable business. Some have been given away but most have been sold. Los Hermanos were a valuable asset in the history of New Mexico. Their prayers were intense and in their devotion they were acting under their constitutional right to assemble and worship God as they saw fit. It is a great privilege to live in our present age, but if we destroy our past history, we could also destroy our present good fortune.

[Note: There were three moradas in Questa—one near Cienega, one up Cabresto Road, and one on Embargo. On St. Anthony’s day, his statue was carried to the morada at Cienega, then to Llano and Embargo the first year; the reverse path was followed the next year. This statue is still at the church.]