Menu
PrevThe Founders of Questa, by J.P. Rael
Floyd HamblenNext
From Our Hearts and Minds

Don Diego Vigil lived in this valley for many years and during his stay he was very active and prosperous in all his enterprises. 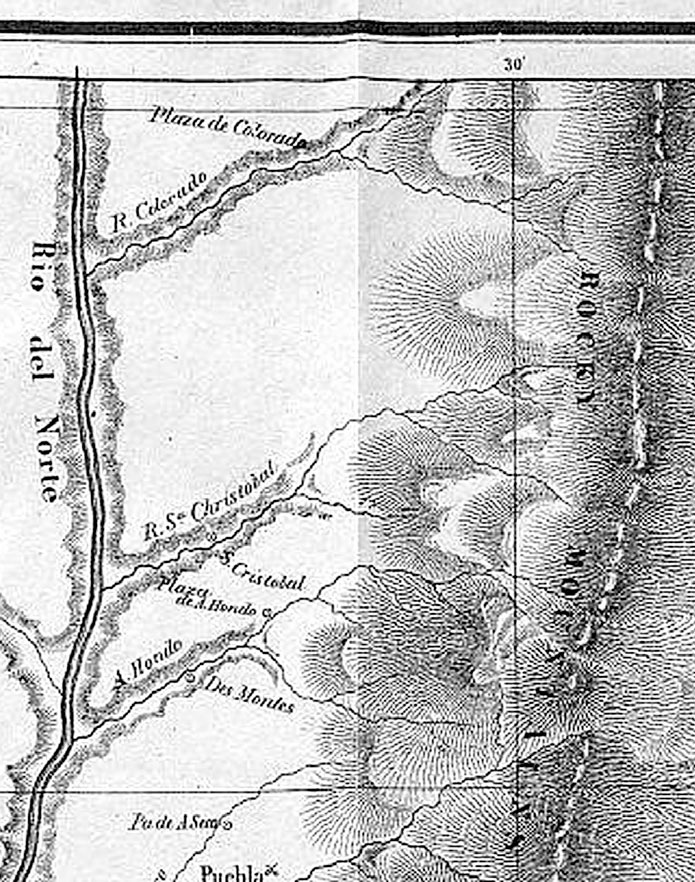 Don Diego Vigil lived in this valley for many years and during his stay he was very active and prosperous in all his enterprises. He accumulated quite a sum of money and according to legend he had it buried for safekeeping at different places. I used to hear people talk- ing about the time that he sold one of his houses to Floyd Hamblen, to which Hamblen proposed to make some improvements.

This house, as would be expected, was of the bigas (vigas) and adobe construction. Floyd noticed that one of the bigas had a different appearance to the others. A hole had been bored in this particular one and then had been plugged up with such audacity that it took a very close look to notice that it had been worked on. Hamblen, upon examination, found after removing the plug, that this biga contained a cavity with considerable room for storage. He began removing the content and there found over $700.00. Many stories were told here and there of considerable amounts found hidden at other points of the Don Diego Vigil property.

During his active life he was one of the Dons. He had command and dominion of consid- erable property and number of people which was the source of a steady income for quite a long time. I used to hear people talk about the time Don Diego operated a freight line to the States. From this part of the country they hauled produce—wool, hides, pelts, etc— and in return they brought dress goods, clothing, and tools, and other essentials obtainable. All this transporation was done on the facilities of those days—ox-drawn covered wagons making one trip over and back during the summer. This of course was a profitable business for Don Diego which made him one of the outstanding citizens of the community in the financial field of those days.

I came to know Don Diego in 1904 and at that time according to what I used to hear of his age, he was well over 90 years old. He was blind and alone. All of close members of his family had died. So for a home he resorted to the idea of asking for lodging one day and one night at every home in the community. No home denied him accommodation and food and in fact every where he went he was cordially and gladly accepted as a distinguished guest. To go from one home to the other, he was led by a friendly boy or girl who were always glad and even considered it an honor to be at the services of Don Diego. And Don Diego bent by the weight of his years over his shoulders, an oak cane in his hand, his scanty hair and his beard as white as the snow, his face drawn and wrinkled and sallow, his legs a little shaking but still stout to carry him over from one home to the other accepted this hospitality jovially and pleasantly. Soon you could hear him start on his story telling and anecdotes. For us young kids it was like reading a fairy book or a book of dreams or fic- tion. His accounts varied from legend to true story; from Indians; from the most scorching
droughts to floods and wet seasons. He must have seen it all. Soon the night passed unto the early morning hours and still Don Diego was as eager as when he started. And so Don Diego more than earned his lodging and was beloved by all the community.

For some years Don Diego lived like this, at the mercy of the community but finally he decided to use some of this money. In his later years he arranged with Don Narciso Vigil to be taken care of for the rest of his life. He died well over a hundred years old practically of old age.

Some of the historical remains of his property of which the old timers still have recollections, but which by now have crumbled by inclemency of time, is the “Oratorio House of Prayer Chapel” that he built and that he preserved for a long time. I used to hear people say that here Don Diego himself conducted at times services and religious teachings more or less in the form of a Sunday school. Considering the times in which he lived it is assumed that Don Diego was a man of letters and good upbringing.

All of his property, by this time has been disposed of, and what used to be his land and home—his home site has passed to other people in the community. One thing remains—a vivid recollection, for those that knew him—the elder of the community supposedly very rich but blind and weak, although very optimistic still entirely dependent on his fellow men.

(Note: Don Diego seems to have been the model for the blind Marianito Cordova in J.P. Rael’s poem “Los Pobladores de Questa.”