Our Church of San Antonio 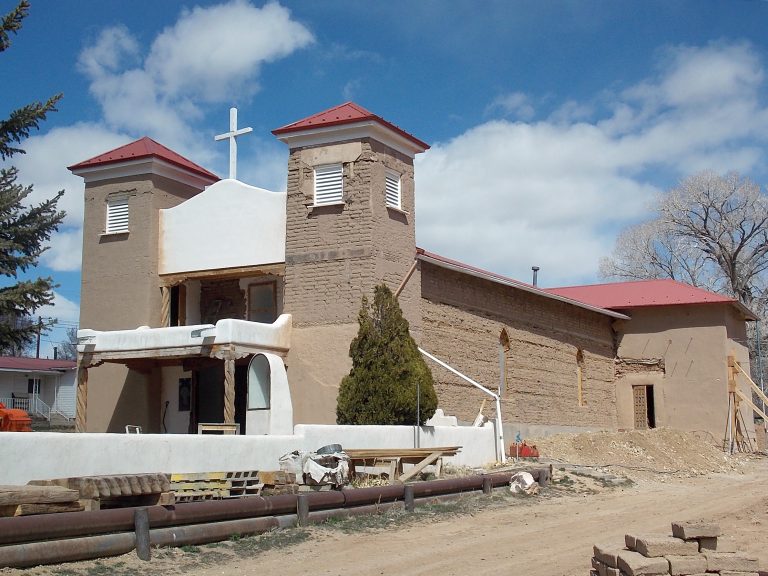 San Antonio church is the biggest treasure our forefathers left for us. It was built with a lot of faith and sacrifice. They brought the Catholic Faith with them from Spain. The church is made from big adobes. Not long after the settlers arrived, according to the information passed on from father to son, the church project was begun. The church is a replica of all other Catholic churches built in those days all along the Spanish settlements.

Working hard with a spirit of unity and loyalty to their faith, men and women set aside every Saturday as a church construction day. From early hours of the morning until the sun went down they worked on this project until it was finished.The walls are very wide. For the roof they used vigas and latillas. The vigas were brought down from the Canada Larga.

There were no burros, horses, or wagons. So five men would carry a viga on their shoulder a ways, then five more would do it. That is how they brought them down the mountains and set them on a piece of land where they cleaned the bark off. Then they were brought to where the church would be built. Then they started making the adobes. They made a form of about ten to twelve adobes; they mixed mud with straw and mixed it, let set until they were dry. They made about three hundred a day. The floor was mud made real smooth. It is said that people were buried in the Church under the mud floor and outside in the church yard.

When the Church was finished it was time for bells for the Church. They brought a man from the southern part of the territory who was famous in molding bells. When he came the melting ovens were built as well as the molds. Oak wood was brought from the nearby hills because that kept the fire warm longer. As soon as the molds were made every person living in the community was called to throw their gold, silver, and copper in the mold.

When the bells were ready they were baptized as Maria Antonia and Maria De los Dolores. A big fiesta followed. The bells were hung on a hanger on top of the church and tried out. The bells gave out such a loud and clear sound that they could be heard over a distance of five miles or more. The wood-man in the forest, the herder in the mountains, the laborer in the fields could tell by the tolling of the bells whether a neighbor had died or whether there was a fiesta to be observed or a wedding in the hamlet. Our famous bells were so beautiful. You could hear the sound up to where Grandma Meme lived.

On the 13th of June each year, La Fiesta de San Antonio was observed and celebrated. Before were visperas. The church was surrounded with luminarias, the people went around the church in procession, the Holy Societies carrying the standard and image of San Antonio in the lead singing hymns and praising the Lord. There was also a firing squad manipulat- ing those old cap and powder long-barreled rifles. It was done in honor of the patron saint San Antonio.

The main part of Questa was from the entrance of the Church up Cabresto Road. The main road was the road by the Parish Center. The road didn’t go as it now goes by the cemetery.

In 1942 the first parish priest was assigned to Questa. He was Father Smith. He had a set up that at 9 pm every night he would round up all the young people, take them to their parents, and ask them why their children were out at the time of night. He then gave all the day’s news on a big horn heard all over the village. People really liked it because they heard what was going on in the world.

People in those days were very religious. When daylight was coming they would sing “El Aloe” and pray together. You would get such a nice feeling to hear El Aloe. People were always happy and had a lot of faith. Christmas programs were a big event. The school held their programs at the Cardenas Hall or at the SPMDTU. The whole community would attend. In the month of May, we would pray the rosary at 5 PM everyday at the Church. Mrs. Fedelia Medina was our teacher. Each one of use would take a flower every day. We made them out of crepe paper, then melt a candle, stick it in, and it would get real pretty. A lady from the village played the organ and we would sing.

Our Church has always been kept very nice by the people. What our forefathers left for us in the Church is one of our biggest blessings. They must have been very smart to have left such a nice building that is still standing. I remember when it was heated with wood stoves, one in the front and one in the back. A lot of wood was used. I pray it will never be torn down. It is a landmark. The sad part is that our bells disappeared. They meant a lot to the people.

Here is the song—“Los Milagros de San Antonio”—that is sung in processions, as well as two songs for pilgrimages.

Miracles of Saint Anthony of Padua

If my tongue tires not
And if my audience will listen I shall tell of the miracle
Of the Glorious Saint Anthony.

He was born in Lisbon And there he was raised In the chapel of the king For Christ he was reborn.

His voice was heard in Rome In his mother’s tongue
Forty plus nations
Understand him, each and every one.

From the pulpit of Padua While he presented his sermons He goes in spirit to Lisbon
On a memorable occasion.

God has revealed to him That his father shall hang Because of false witness By pagan people.

He presented himself to the Courts Suddenly and asked

“That man that is going to die what crime did he commit?”

Death he gave and death he shall receive Was the severe answer.
“He did not kill” responded Anthony. My word is truth.

“Come with me to the sepalore and you shall hear it from the dead man himself.
As the cross was shown The dead man arose.

“In God’s name I ask you”
said Antonio, “What do you declare if the death you received was
from this elderly one who is my father.”

With a clear and sweet voice
“It is not true” yelled the dead man and quietly he returned
again to his grave.

Everyone followed the saint Who climbed upon a boulder Between the earth and the water And manifests the power of God.

Fish and animals came out
To listen attentively to his voice. Birds descended from the skies And listened with devotion.

The blind could see The lame could walk The deaf could hear The mute could talk The dead arose.

We come from the east, north, south and west And we present you with all our love.

Brother pilgrams from afar
We come to bring glory to our Lord.

All the suffering we bring my Christ Today we offer as a sign of our love.

We give you thanks because you have united us with all our brothers.

Happily they came Lord Singing happily they come Lord
Those who walk through life, Lord Planting your peace and love.

They come bringing hope
To a world filled with anxiety
To a world that seeks but does not find it Walking out of love and friendship.

They come bringing in their hands Efforts of brothers for peace Desires for a more humane world That is born of goodness and truth.

When hate and violence Grow in our hearts

The world will know through its heritage They save their sadness and pain.

The San Antonio Fiestas are celebrated the weekend close to the 13th of June. The first fiesta was held in town on the property next to First State Bank. Then it was moved to the Moly Corp site. We have had a queen every year. When it was here in town we would walk from the Church to the grounds. Now people and the new mayordomos walk with San Antonio to the Fiesta grounds.