Menu
PrevFloyd Hamblen
From the RecordNext
From Our Hearts and Minds 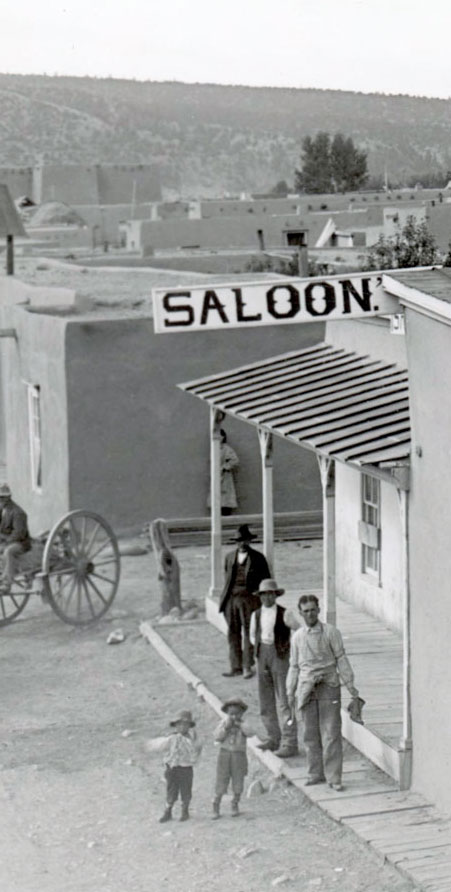 By 1840 San Antonio del Rio Colorado was well established and new settlers were continually arriving and more houses were being built all along the mesa which is now Cabresto Road.

The first settlers came walking through the south Kiowa Trail. They walked driving their herds of sheep with them. They came upon the Rio Colorado, drank its precious water and made camp for the night. They gathered around the camp fire to see what they would name this beautiful valley—San Antonio del Rio Colorado. The next day they began making little huts here and there. Then they started their houses on the mesa (Cabresto Road).

Along came their relatives and they started building plazuelas. A plazuela is a big home made in a U form. These plazuelas were built with big yards or big tapia so they could bring in their animals into the yard when there were to be attacked by the Indians. Different families lived in the plazuelas, each one had their own hall for their fiestas, dances, and etc. There were four plazuelas in the community.

Whenever one of the plazuelas had a fiesta or a dance they would invite the people from the other plazuelas to join them. Some of the first families to come were the Armentas, Lafores, Gallegos, Vigils, Martinez, Cisneros, and Raels. The Gallegos plazuela was one of the landmarks at the mouth of Cabresto Canyon.

When the Indians found out that their land was being taken by these newcomers, they rose up in arms with bows and arrows. The settlers chased the enemy away, and then organized a Council. They placed a sentinel on the mountain to the east. Since then it has been called El Sentinel Peak.

The sentinel was watched by a man every day. By the dust made by the horses he could tell Indians were coming. By the signs he gave it meant the Indians were coming. Either by smoke or a flag was the sign. At night they would gather to hear the story-teller. They would first pray then hear the stories sing and dance. At the time of the harvest the people worked side by side harvesting their crops and helping each other like friends. The first step was to build a church.

Questa was first named San Antonio del Rio Colorado. It was changed later to Questa by the first postmaster when the first post office was established here in 1883. The new name for our town was mispelled. It should be Cuesta. The postmaster had a hard time coming up the Garrapata Hill which now is called the Mile Hill. The first post office was close to where the Centinel Bank is now located. The mail was brought in by horse and later by horse and buggy.

I just saw in the Taos News where it says Cabresto Lake is man made. It is not true. Maybe lately the border of the lake on the south was fixed by men but the first settlers found it and they would use a rope to see if they could touch bottom. They couldn’t and named it the Cabresto. Many years ago that lake overflowed and came down. That is why Cienega has a lot of rock.

Five of our young boys died in World War II. We did without a lot of things during the War. We had to have stamps to buy shoes, sugar, and gas. Buses were used during the War. People going to work in California at the war plants moved and took their families. First the head of the family would go; then when he got enough money, he would send for the rest of the family.

Some went to Utah. Most of them came back, but a few stayed. Airplanes weren’t used then. People who came back had saved money. They built homes, bought cars. When a soldier came home from the war their relatives and friends would come to the bus depot to meet and greet them. Our community had come back to normal.

The Village of Questa was incorporated in 1964. Two ladies would go for all of the Cienega Area, two to Llano, two to Cabresto, two for main town, and two for Embargo to get sig- natures to incorporate Questa. They got the signatures but still had to go through a lot of hard times. Marcelino Martinez was the first Mayor, J.E. Rael, George Wishart, Bernale Ortega, and Max Ortega were the first Council members. Juan Valdez was police magistrate. The clerk treasurer was Gail Cisneros and Eliu Romero was the attorney.

For a while they worked for free as there was no money. Their meetings were to be held the first Tuesday of every month. They first had their meetings at the old Parish Hall. Then they moved them to the lobby of The Sangre de Cristo. Next they were held at Grant Howe’s extra room, then to the first metal building in 1966, and finally the existing building.